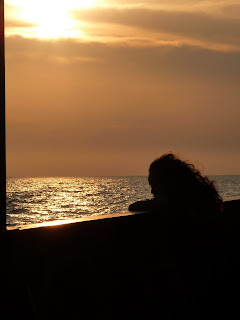 04 september 2010
We left Barcelona at noon. The weather was great, the conditions were perfect. About 30 people to wave us off, including my father, Fabian & my doggy Luna.
It's always hard to say goodbye...

05 september 2010
Sunset
The sea is flat like a mirror. We cut through black water direction Orion. The moon is a hammock but you can see the contour. A zillion stars & the milky way.
On my evening watch i saw tunafish and dolphins and a few birds. I don't know if it's because we were still close to land and it was the influence of pollution but the sunset was fire red, burning flame and also took longer than I am used to.
I'm still a bit anxious, the routine hasn't set in yet. 4-8 and 16-20, thats my working hours. I look at the red coloured radars at night and look out over the ocean at daytime.
Silence and peace.
We are now: 39' 45"N and 6' 19"E

Sunrise
My first sunrise on the Steve Irwin.
The sun came out suddenly and within minutes it was full blast.
I remember now, I remember the taste of morning ocean mixed with coffee.
Of salty air and warm wind.
I remember now, how the waves of thought become longer and slow down.
How long distance view sharpens and senses grow stronger.
The bow of the ship sways before me and from my viewpoint on the bridge it looks almost as if it were a different entity. As if it would be able to break free and go its own way.
I feel safe, this ship is beautiful.
For the next 6 weeks this is my home. 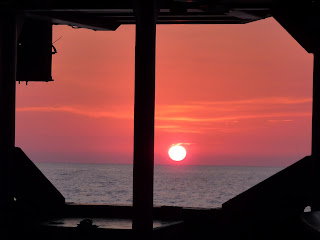 09 september 18:10
Incredibly beautiful sunset with a veil of clouds. Swimstop at 16:00. Warm Egyptian water. A bird with us the entire day. Bonding with the crew. It's getting warmer every minute. Wrote and email to Ulla. All is good.
Tomorrow we reach Egypt. 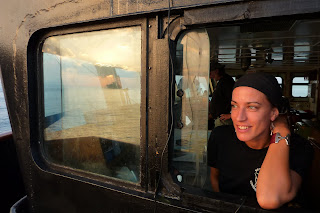 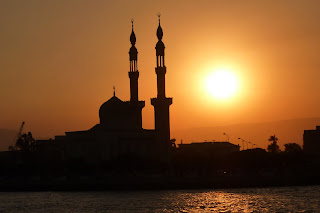 12 september 06:34
We are in the Gulf of Suez. Oilrigs all around.
The sea is fierce, choppy and it's very windy. It seems hard for the ship to stay on course. After a day of mirror flat surface this feels like a semi storm.
27° 45. 92' N
33° 46. 34' E
SOG 13,5 knots
I steered us out of the anchorageplace in front of Suez and to the pilotstation and yesterday I steered us again out of bitter lake and back into the canal. It feels nice. 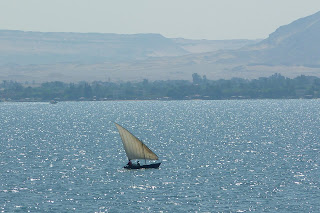 13 september
THE RED SEA!!!
Humid heat envelops us. Everything is wet when the sun is asleep and when the sun is out it pounds merciless, penetrating everything on this black boat. There is nowhere to hide from this, every cabin, every corner is hotter than the next one. Ventilators blow hot air. You can't decide whether you want them on or off... Showering with your clothes on, then positioning yourself in front of a ventilator seems the only bearable thing to do ... if only for the 5 minutes ... During the day the boat heats up even more. Black paint absorbing fotons. When the the sun sets it takes hours for the walls to stop radiating. You burn yourself touching them.
Then night brings no salvation. The humidity is false hope. It sets on your skin, closes the possiblity of breathing. Pores, desperate for oxygen are deprived of it. Suffication.
I look down and even the pitchblack water looks inviting. My fear of swimming is being silenced by the need for cooling.
Visions of icebergs, thought of Antarctica, a craving for a place I have never been.
The barometer broke, probably collapsed under this weight.
The sea is stuck on my skin.
We are now one.
--- 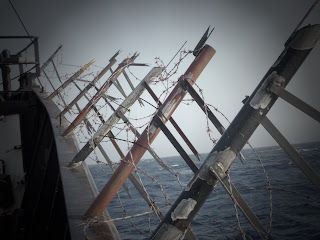 The crew is incredible ... putting up anti-boarding spikes on the side of the boat. Welding, working hard for our protection against pirates. In this heat I can only look at this in awe. Their energy and commitment on a voluntary basis deserves eternal respect.

19 september 05:00
It's crazy weather out there. The ship is jumping up and down, rolling to the sides and catching waves in the proces. We had our first downpour. Fierce, heavy rain in an angry sea. Washed off the desertsand and the salt of the Red Sea. All fresh again. It's hard to stand up without falling. Things keep flying around the bridge.
The Arabic sea is emerald green, like the eyes of a princess.
We are in open sea now, for the first time in my life. But I am not scared. I have faith in the capacities of my captain but above all I trust this ship. It might be 37 years old, I can feel its strong heartbeat under my bare feet. The deep regular groan of the engine makes me calm.
The ship is withered and tathered and it leaks here and there but it has lived and survived for many years. It's knowledge of the oceans is indisputable and I think that Alistair is right when he says "a ship is the only piece of machinery with a soul"

22 september 2010
FULL MOON - EQUATOR PASSING - SUMMER SOLSTICE !!!!!!!!!!
At 15:35 we slid into the southern hemisphere. While Helen was being baptised and humpback whales were breaching not far from the ship I crossed yet another milepole. For 18 of us this was the first time. We underwent a ceremony (quite a disgusting one) and are now introduced in the Mysteries of the Deep. After this ceremony we jumped in the ocean..... with 4000 metres depth under me it is by far the craziest thing I've ever done.
I am exploring new horizons, stretching my limits and finding new, beautiful places within myself. I cannot possibly be happier than this.

Zo ver van huis ben ik nog nooit geweest .... :-)
I have never been this far away from home
Posted by Catherine at 5:17 AM